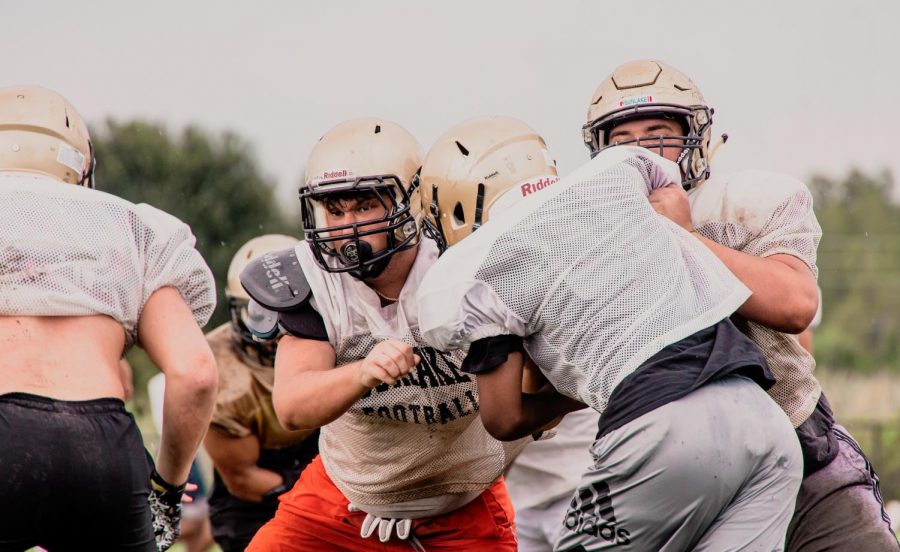 Frankie working off of a combination block during practice.

Our football season is arriving quickly and on September 18, 2020 our seniors will be celebrating their last home game as a Seahawk. Seniors are thrilled to take over the night and ecstatic to even get a chance to play due to the current pandemic. One of our seniors  has been on the football team since his freshman year (2017) and really had a deep connection with this particular sport. “Man out of the three years playing it’s been one heck of a ride. From meeting new people, to saying goodbye. To changes in my life, to opening doors of opportunities. Football made a big impact on my life. It wasn’t even just about the sport itself. It’s always the people that make it different. These players and coaches aren’t just players nor coaches, to me. They are my family. Saying goodbye is going to be hard but that’s life. We all grow but we all know where we began. Football is where my story began and I couldn’t be anymore grateful for being on the team.”

Sports are a big part of our lives in high school and it shows us responsibility, development of  leadership skills, and even helps us grow as a student.  According to Frankie football helped him grow more as a student by “…preparing me for life. One thing I always have in my mind is something from junior year. Coach Burdick would always ask me, “Which wolf wins, the positive or the negative wolf?” The answer is always the one you feed, because if you continue to have negative thoughts you’ll have negative results. It’s not just Football, but I believe all sports help you grow as a person and make you overall a stronger person.”

Even before he started to play he always had this yearning passion for football. He did have a small struggle trying to get into football,  “… my dad wouldn’t allow me to play until my mom forced him to let me. So finally I’m 15 years old and somehow I’m playing Spring Football with the boys.  Sometimes I wish I could have started playing football earlier but honestly, I’m extremely grateful for the way it turned out.” Even though his dad didn’t want him to play football his mother had faith in her son to play and the outcome of his mothers decision worked out in his favor.

He is now a starter for the varsity football team and plays center and offensive line. He did have to train and get in shape in order to keep up with these positions. It’s very important to maintain a certain diet when it comes sports and he did that by, “…losing weight not only to get faster but to also prepare for life after football. I went from 245 to 218 in a couple months basically living off of eggs, protein shakes, and a lot of steaks. Also I mostly did weight training like benching, squat, and all that good stuff. Then after our coach would make us condition for an hour and sometimes we would even do lunges around the field.” This training and diet has helped Frankie improve and feel ready to take on his senior night.

Although training and maintaining a certain physique is important, they are still high school students and do live up to expectations of fun while training. “My teammates are the best plain and simple, there is never a dull moment on the practice field. If we’re not hyping each other up and getting ready to hit each other then we are on the sidelines cracking jokes. Family means absolutely everything to me and if you didn’t know already the Sunlake Football program is one giant family. Even if it’s a scorching hot day on the field it doesn’t matter because the fam is together, doing what we love.” There is certainly no I in this team, its like a group of brothers. This bond they have created for there upcoming season might even take them to the championship if they work hard and keep this attitude.

Being on that note, Sunlake has a traditional game that goes way back in time. This game is known as Butter Bowl and the team has been looking forward to play our rival Land O’ Lakes High School and especially Frankie himself. These teams both have “…heated rivalry…” and Frankie expresses that the team is “…representing the entire school. As a senior this is the last time I’ll ever be able to play them as the football team is going to do everything in it’s power to keep the butter bowl trophy where it belongs.” This passion and hope he has for this game can really inspire others and even his drive for football can inspire our new underclassmen.

Sometimes underclasses get a little nervous entering high school and especially playing with new team mates. It can be overwhelming but Frankie had a few words of advice for people like him that have a energy and a drive for football as he portrays. ” I would definitely recommend to play football and believe me, you won’t regret that decision. To me it is the best team sport in the world but also be prepared to not be the best player right away. It takes a lot of time and a lot of patience, but if you put in hard work you’ll see the results. There is way more than just “being on a  football team.” It helps you make friends, enter a new family, and teaches you life skills. Trust me it will be the best decision you ever make. Just be willing to learn and keep your head up and no matter what you do, don’t give up.”